Sugano Kaede took the Minister of Economy, Trade and Industry Award, and Raian Moriya took the CSAJ award in the elementary school section.

The Masason Foundation (“the Foundation,” President: Masayoshi Son) has announced that two associate members, Kaede Sugano (14) and Raian Moriya (9) won awards in the U-22 Programming Contest 2017 (organizer: the U-22 Programming Contest Executive Committee). Kaede Sugano took the Minister of Economy, Trade and Industry Award, and Raian Moriya won the CSAJ Award in the elementary school section.

The U-22 Programming Contest has been held since 1980, and is a submission-based programming contest for people under 23, which aims to uncover and nurture young people of talent. In this year’s U-22 Programming Contest 2017, after preliminary judging, primary judging, and the final judging held on October 1, 2017, 4 entries were chosen for the Minister of Economy, Trade and Industry Award from a total of 334 submissions. In the elementary school section, 13 entries were chosen for the CSAJ Award from a total of 56 submissions.

Kaede Sugano’s submission was a piece of software called “narratica,” which analyzes stories using natural language processing and assists in the creation of interesting works. It was evaluated as, “Among all of the submissions, it is vastly superior in both creativity and future potential, and promises possibilities for the future,” and won the Minister of Economy, Trade and Industry Award (Idea). Sugano commented on her win, saying, “I thought that maybe it was possible to create a story that people can immerse themselves in using a computer, and I’m very happy that its continuous development has been valued. From now on, I want to study natural language processing and theories of narrative structure further, and brush up on the algorithms and programming. Being praised with ‘a reckless challenge for a magnificent idea’ at the final judging has made me really motivated!”

Raian Moriya’s submission, Hayabusa2 & Osiris REx was evaluated as being highly creative and having great potential, and won the CSAJ Award. Hayabusa2 & Osiris REx compares the missions of the Japanese asteroid explorer Hayabusa 2 and the American asteroid explorer OSIRIS-REx, while hoping for their success; both explorers are gathering fragments from different planets, including substances thought to be from the time of the birth of the solar system, and returning to Earth. His submission also supports the known mystery that among the many living beings, humans alone wish to know the beginning of the universe. Moriya commented on his win, saying, “I made this wanting people to know the story of Hayabusa, which inspired me. I’m in my third year of elementary school, but I want you to know that I’ve created all my pieces of programming up till now through self-study. I think there aren’t yet many elementary school students who do programming, and so I entered this competition thinking that I’d to trigger as many elementary school students as possible to start programming after seeing my work. It’s a waste if they don’t know how fun it is! I wanted to say that, so I’m happy I’ve received this award!”

The Foundation provides support to help the growth of the people who will support the future – expanding the potential of youth from all over the world with high aspirations in various fields through exposure to new values and the latest technologies, and interaction with members.

The results of the U-22 Programming Contest
http://www.u22procon.com/ 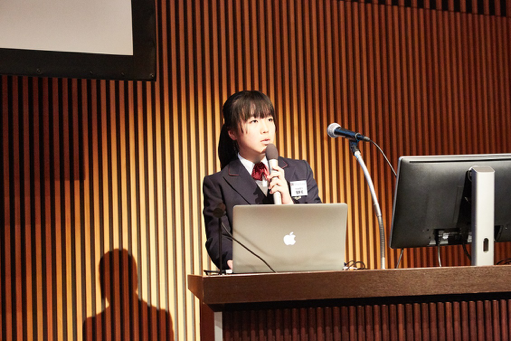 Sugano giving a presentation at the final judging 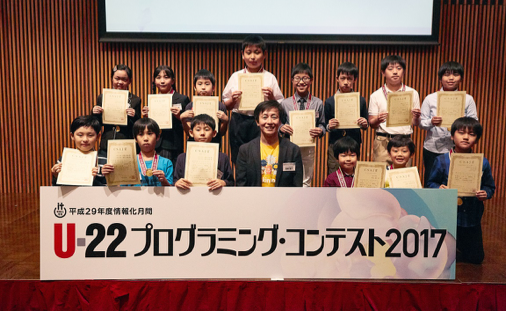 About the U-22 Programming Contest

This contest was organized by the Ministry of Economy, Trade and Industry from 1980, aiming to uncover and nurture talented innovative people in the field of IT – not those who are simply able to program, but people working to develop software with a wealth of ideas. The contest was privatized in 2014, and is organized by the U-22 Programming Contest Executive Committee, made up of companies that agree with and support the aims of the contest. Its executive office is managed by the Computer Software Association of Japan (CSAJ), and both these organizations are continuing this historic programming contest and supporting youth who will create the future.
For more details please go to http://www.u22procon.com

The Masason Foundation was established in December 2016 by the SoftBank Group Representative Masayoshi Son to provide an environment that enables youth with high aspirations and exceptional talents to develop their skills, and to contribute to the future of humanity in the coming age of Singularity. In July 2017, 96 people aged from 8 to 26 were chosen as members to be supported by the Foundation as Generation 1 in FY2017. The Foundation provides support to help the growth of the people who will support the future – expanding the potential of youth with high aspirations and exceptional talents through exposure to new values and the latest technologies, and interaction with members.
For more details please go to https://masason-foundation.org/en/